Mapping in the ancient greek civilization to the dark ages. 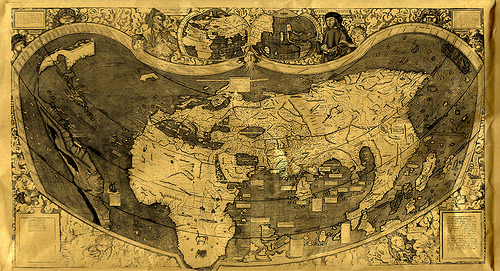 Humans have long recognized the importance and value of maps in their daily lives. Mapping, or cartography, in a formal sense, has already become an integral part of human history for up to eight thousand years now. From abstract stick charts made by Polynesians to the ancient maps of Babylonia, Greece, and Arabia, through the Age of Discovery, and on into the 21st century. Maps are essential tools, which are used to help people define, explain, learn, and navigate their way around the world.
From the caves
The earliest known maps are cave painting and rock carvings which use simple visual elements to facilitate the recognition of landscapes, such as hills or basins. In Navarre (Spain), there is a map-like polished chunk of sandstone, which uses symbols like mountains, rivers, valleys and animal etchings that can be dated back to 14,000 BC. The Çatalhöyük map was created from a bird’s view and later civilizations followed the same convention. Almost all maps today are drawn as if we are looking down from the sky instead of from a horizontal or oblique perspective, as was often common in the “cave days”.
The ancient Greeks
Ancient Greeks produced several outstanding scholars, such as Anaximander, Hecataeus, Herodotus, Eratosthenes, and Ptolemy who all draw maps by using observations from explorers combined with mathematical techniques. Miletus, an Ionian’s city in Asia Minor, absorbed intellectual thoughts from Babylonian and was able to profit from the expanding commerce of the Mediterranean. Anaximander of Miletus (611~546 BC), who is claimed to be the earliest known person to construct a map of the entire world, believed that the earth was cylindrical in shape and we lived on the upper surface of the cylinder. For this reason, he is considered to be the first mapmaker. Unfortunately, any definite geographical knowledge that he included in his map is lost as well. Fifty years later, Hecataeus produced another map and claimed it was an improved version of its predecessor.
Along the lines of a Greek worldview derived from the Homeric poems, Hecataeus described the earth as a circular plate with an encircling Ocean and Greece in the center of the world. Hecataeus assumed the world was divided into two continents, Europe and Asia, in his geographical work called Periodos Ges. However, Herodotus rejected the prevailing view of that the earth is a circular plate surrounded by Ocean which is used by most 5th century BC maps. He traveled very extensively and wrote his Histories to include everything he knew about Europe, Asia, and Libya (now North Africa region). He believed the earth as an irregular shape with oceans surrounding only Asia and Africa, and divided the world into three continents: Europe, Asia, and Africa.
Mapping and philosophy
Aristotle (384~322 BC) is the one to be credited for proving the earth is spherical by observing results among Greek philosophers. Eratosthenes (275~195 BC) is credited with mapping insights due to his first scientific attempt to give geographical studies a mathematical basis – estimates of the circumference of the earth. He was the first to calculate the circumference of the Earth (within 0.5% accuracy) by calculating the heights of shadows on different parts of the Egypt. His great achievement in the field of cartography was the use of a new technique of charting with meridians, his imaginary north–south lines, and parallels, his imaginary west–east lines. Then, Eratosthenes used these earth partitions to reference places on the map. He was also the first person to use the word “geography”.
With the aid of astronomy and mathematics, Claudius Ptolemy (90~168) concluded that the earth could be mapped very accurately.  Ptolemy used perspective projection to depict of the spherical earth on a map. He also suggested a precise method for recording the position of geographic features by coordinate system with parallels of latitude and meridians of longitude. Ptolemy’s achievements revolutionized the mapping process thoroughly and established the development basis, namely Geographia, of modern mapping and GIS.
The Geographia included an index of place-names, with the latitude and longitude of each place to guide the search, scale, conventional signs with legends, and the practice of orienting maps so that north is at the top and east to the right of the map as same as universal custom nowadays. Ptolemy’s error convinced Christopher Columbus to sail across the Atlantic due to Columbus belief that there could be a faster way to India if Eurasia really covered 180 degrees of the earth as Ptolemy’s estimation. However, if Columbus had known the much greater distance he might have never started his significant voyage.
The dark ages of mapping
Although the people of Europe achieved many great advances during the classical age, there was little progress in cartography during the middle age, also known as “The Dark Age”. Most maps were produced within monasteries, religious zeal tended to dominate mapping. Adopting the principle that having Jerusalem in the center of world map and Orient (Minor Asia) at the top of the map is an interesting development affected by the spread of Christian ideas at the time. Medieval maps are similar to much earlier Babylonian Map such as the Mappa Mundi (cloth of the world). These maps were circular or symmetrical cosmological diagrams representing the Earth’s single land mass as disk-shaped and surrounded by ocean.
In the Arabian Peninsula and Islamic world, the study of the science of cartography also made a lot of progress during this time. An excellent example is Al-Idrisi’s work, an Arab scholar. He produced a number of outstanding world maps during the period around 1154. It is believed that the influence of Al-Idrisi’s work was far reaching with generations of Islamic mapmakers using his designs as the basis of their maps.
Also Worth Reading:
5 Mapping Tools That Can Make Your Job Easier
Should You Be Using Intensity Maps?
5 Ways Data and Maps Can Help brands Expand Environmentally
Share：