A run-of the-mill mid-market Cantonese restaurant on Yanping Road quietly turned off their lights and took their sign off the hook. 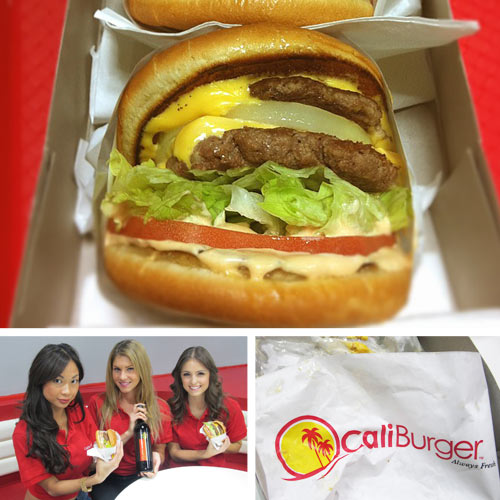 A run-of the-mill mid-market Cantonese restaurant on Yanping Road quietly turned off their lights and took their sign off the hook. Within a few days, a massive banner was wallpapered across the old storefront, urging citizens to prepare to feast on a Double-Double and Animal-Style fries. This statement vexed and inflamed burger-lovers across the city (Animal-Style is supposed to be a secret!) as well as created a commotion on Dianping.
Although In-N-Out established a surprise ‘market-test’ event at Sasha’s in Shanghai several weeks ago, the whole premise was created as a shot across the bow to would-be upstarts such as CaliBurger. All legal issues between CaliBurger and In-N-Out appear to have been settled. One of the resultant changes is that CaliBurger will tentatively re-name its products (the Double-Double is now the CaliDouble).
Three CaliBurger investors, Roy Newman, John Miller, and David Sun were in town to scope out Shanghai and add finishing touches to the concept. David Sun, COO and Director of Caterlex (parent company of CaliBurger Asia), chose Shanghai over Beijing, as it is “more expat-oriented and cosmopolitan”. As part of their expansion drive, CaliBurger is banking on HaiGui burger aficionados to convert skeptic locals into “HanBao” believers. In 2012, CaliBurger aims to open 3-4 more stores in Shanghai.
Once city location was set, the team drilled down and spent several months determining the best location for their first store. Yanping Road was CaliBurger’s “optimal” location due to the large percentage of expats living in the area. In addition, Yanping Road has strong F&B potential as Kush, Sushi Abuse, D’Vino, Downstairs, Aura, I Love Shanghai, and soon to be opened Villa du Chocolate are all within a block and a half radius.
getchee Analysis
If you don’t build it, someone else will. Although In-N-Out didn’t have plans to expand in Asia, they could have. Now it looks like burger-lovers will have to enjoy In-N-Out’s style vicariously through CaliBurger. Maybe this is just a smart move by In-N-Out to test the market and then swoop in via CaliBurger’s coattails.
At this point, you might be thinking that this is just another one of those typical China copycat stories. Make note that CaliBurger and many other clones in China aren’t the works of the locals. This is just an eye-opener to show you that anyone could potentially imitate your idea or brand if you don’t take measures to protect it. Fortunately, China is really becoming keen on wanting ‘the real deal’, especially when it comes to retail apparel and merchandise. We’ll see if this trend eats it way into the retail food industries.
Share：