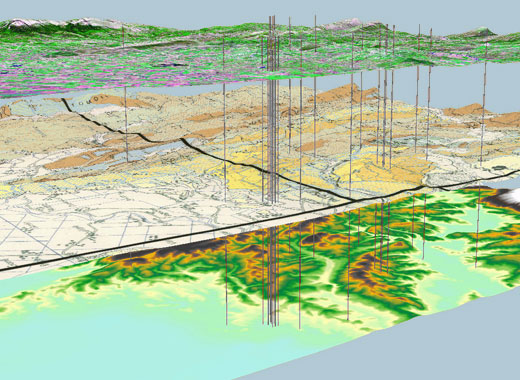 As the use of GIS (Geographic Information System) continues to impact our daily lives through the use of mapping tools, navigation systems, and even social media, both public and business interest continues to grow. For those interested in learning more about GIS, here are 25 important terms related to GIS. All these terms can be divided into three categories, data structure, data management and geo-processing and analysis.
GIS terms related to data management:


1 – layer
The visual representation of a geographic dataset in any digital map environment. Conceptually, a layer is a slice or stratum of the geographic reality in a particular area, and is more or less equivalent to a legend item on a paper map. On a road map, for example, roads, national parks, political boundaries, and rivers might be considered different layers. View a visual example of this here.

2 – Feature Class
In ArcGIS, a collection of geographic features with the same geometry type (such as point, line, or polygon), the same attributes, and the same spatial reference. Feature classes can be stored in geodatabases, shapefiles, coverages, or other data formats. Feature classes allow homogeneous features to be grouped into a single unit for data storage purposes. For example, highways, primary roads, and secondary roads can be grouped into a line feature class named “roads.” In a geodatabase, feature classes can also store annotation and dimensions.


4 – Raster Data
A spatial data model that defines space as an array of equally sized cells arranged in rows and columns, and composed of single or multiple bands. Each cell contains an attribute value and location coordinates. Unlike a vector structure, which stores coordinates explicitly, raster coordinates are contained in the ordering of the matrix. Groups of cells that share the same value represent the same type of geographic feature. Ex: .img .jpg .bmp .map TIN

5 – Vector Data
A coordinate-based data model that represents geographic features as points, lines, and polygons. Each point feature is represented as a single coordinate pair, while line and polygon features are represented as ordered lists of vertices. Attributes are associated with each vector feature, as opposed to a raster data model, which associates attributes with grid cells. Ex: .shp .gdb

7 – Metadata
Information that describes the content, quality, condition, origin, and other characteristics of data or other pieces of information. Metadata for spatial data may describe and document its subject matter; how, when, where, and by whom the data was collected; availability and distribution information; its projection, scale, resolution, and accuracy; and its reliability with regard to some standard. Metadata consists of properties and documentation. Properties are derived from the data source (for example, the coordinate system and projection of the data), while documentation is entered by a person (for example, keywords used to describe the data).

8 – Spatial Data
Information about the locations and shapes of geographic features and the relationships between them, usually stored as coordinates and topology.

9 – Shapefile
A vector data storage format for storing the location, shape, and attributes of geographic features. A shapefile is stored in a set of related files and contains one feature class.

10 – Point
A geometric element defined by a pair of x, y coordinates.

11 – Polyline
In ArcGIS software, a shape defined by one or more paths, in which a path is a series of connected segments. If a polyline has more than one path (a multipart polyline), the paths may either branch or be discontinuous.

12 – Polygon
On a map, a closed shape defined by a connected sequence of x,y coordinate pairs, where the first and last coordinate pair are the same and all other pairs are unique.In ArcGIS software, a shape defined by one or more rings, where a ring is a path that starts and ends at the same point. If a polygon has more than one ring, the rings may be separate from one another or they may nest inside one another, but they may not overlap.
GIS terms related to geoprocessing & analysis:

14 – Spatial Analysis
The process of examining the locations, attributes, and relationships of features in spatial data through overlay and other analytical techniques in order to address a question or gain useful knowledge. Spatial analysis extracts or creates new information from spatial data.

15 – Buffer
A zone around a map feature measured in units of distance or time. A buffer is useful for proximity analysis. buffer Illustration. A polygon enclosing a point, line, or polygon at a specified distance.

16 – Intersect
A geometric integration of spatial datasets that preserves features or portions of features that fall within areas common to all input datasets.

17 – Union
A topological overlay of two or more polygon spatial datasets that preserves the features that fall within the spatial extent of either input dataset; that is, all features from both datasets are retained and extracted into a new polygon dataset.

18 – Dissolve
A geoprocessing command that removes boundaries between adjacent polygons that have the same value for a specified attribute. dissolve Illustration

19 – Erase
In ArcInfo, a command that removes or deletes features from one coverage that overlap features in another coverage.

20 – Join
Connecting two or more features from different sets of data so that they become a single feature.

22 – Projection
A method by which the curved surface of the earth is portrayed on a flat surface. This generally requires a systematic mathematical transformation of the earth’s graticule of lines of longitude and latitude onto a plane. Some projections can be visualized as a transparent globe with a light bulb at its center (though not all projections emanate from the globe’s center) casting lines of latitude and longitude onto a sheet of paper. Generally, the paper is either flat and placed tangent to the globe (a planar or azimuthal projection) or formed into a cone or cylinder and placed over the globe (cylindrical and conical projections). Every map projection distorts distance, area, shape, direction, or some combination thereof.
23 – Projected Coordinates
A measurement of locations on the earth’s surface expressed in a two-dimensional system that locates features based on their distance from an origin (0,0) along two axes, a horizontal x-axis representing east–west and a vertical y-axis representing north–south. Projected coordinates are transformed from latitude and longitude to x,y coordinates using a map projection.

25 – Projected Coordinate System
A reference system used to locate x, y, and z positions of point, line, and area features in two or three dimensions. A projected coordinate system is defined by a geographic coordinate system, a map projection, any parameters needed by the map projection, and a linear unit of measure.
Also Worth Reading:
Top 5 Ways to Use GIS in Retail and Banking
GIS vs. Neogeography
11 Ways GIS Systems Can Be Used in Emerging Markets
Share：