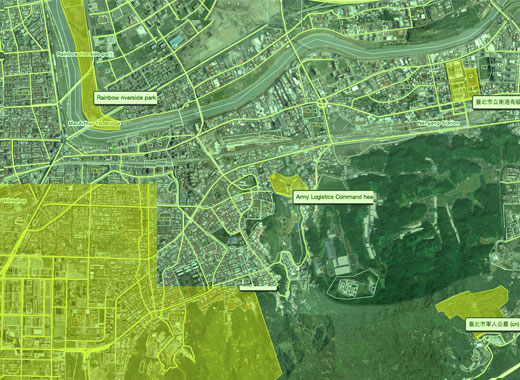 中文版
Understanding land use by populations is becoming a crucial component in business analysis. It’s already well known that the economic energy of a city and it’s population make-up has a positive relationship in the field of business analysis, but in addition to knowing the total population of the city, knowing the outer administrative districts of a population for micro-scale population distribution can be especially helpful in understanding land use. Land use and human life has a close relationship; consider these typical land use relationships as an illustration of this point:
Wikimapia
Wikimapia is the open source version of Google maps, with a very similar interface and usage style. Users can zoom in on the map as close as house level, where users can also use colored mouse-over borders to display or add information about those specific areas.

Baidu Maps
In China, Baidu Maps satellite image map data will update much faster then Google Maps or Earth, which often makes it a better choice for mapping land use in China. In addition to providing point data, address, and phone data, Baidu also provides the appearance of whole buildings enclosed in one photograph , which can be a very good reference resource.
Share：