Where and when McDonald's first opened across Asia. 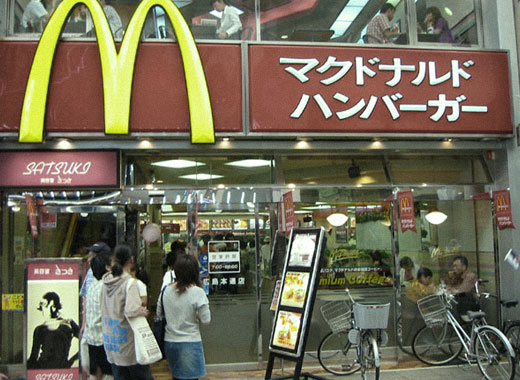 中文版
In 1955 Ray Kroc joined the McDonald’s company as a franchise agent, eventually purchasing the company and initiating its worldwide expansion. With more then 34,000 locations worldwide, McDonald’s is indisputably the world’s largest chain of hamburger fast food restaurants. Here we take a look at when and where each country in Asia received their first McDonalds location.
1 – Japan – 1971

McDonald’s opened their first store in Japan in the middle of Tokyo. Today McDonald’s has over 3,300 stores in Japan, the largest number of stores outside the U.S. When they first opened it created a huge phenomenon from the introduction of the western “fast food” concept.

Funded by McDonald’s UK Corporation, the first official Chinese location for a McDonald’s restaurant was on Paterson Street on Hong Kong Island in 1975. The first location on the Chinese mainland didn’t open till 1990 in Shenzhen.

When the first McDonald’s was opened at Liat Towers in Singapore, the worlds highest volume of hamburgers was served in a singles day. Singapore now boast over 120 locations across the Island.

The first McDonald’s in Malaysia was opened in Kuala Lumpur by the YBhg Tan Sri Vincent Tan on April 29, 1982. McDonald’s restaurants in Malaysia were one of the first in the region to obtain halal certification.

George T. Yang opened the first McDonald’s in Manila in 1981. McDonald’s Philippines is now a 100% Filipino-owned company with over 400 locations throughout the island

Opened on January, 1984, Taiwan McDonald’s was a joint venture between McDonald’s U.S. created and businessman David Sun.  McDonald’s Taiwan once held the record for the highest single-week volume of business in the world. There are currently about 397 locations in Taiwan

The first McDonald’s location in Thailand was opened in Bangkok as a joint venture partnership with the McThai Company.  Thailand currently has about 195 McDonald’s outlets.

McDonald’s opened its first South Korean location during the 1988 Seoul Olympics in Apgujeong-dong, which was one of the trendiest spots at the time. The opening saw hundreds of customers lining up at the location. South Korea currently has about 300 McDonald’s locations.

Opening in New Delhi in 1996, India is the first McDonald’s market with no beef or pork products on its menus. All sauces are egg-less as well better adapting to the vegetarian market. There are currently 300 McDonald’s locations throughout India.

Hundreds of people got in line to be the first to eat at the new McDonald’s location in Ho Chi Minh. The restaurant is being run by Henry Nguyen, the prime ministers son-in-law who grew up in the United States before returning to Vietnam more then a decade ago.
Share：